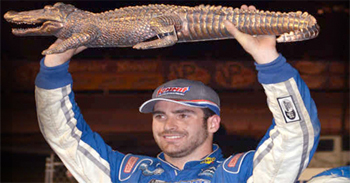 Josh Richards was born and raised in the racing industry. At only five years old he was running pack cars at his family’s I-79 speedway, and working with his father, Mark Richards, at Rocket Chassis.  By the age of 14, with no other racing experience he was driving and racing super dirt late models. His first race would come in Bardstown, Kentucky for the 2003 Dirt Track World Championship (DTWC) where he ran a Young Guns feature and qualified better than two-thirds of a field of 100-plus cars. He narrowly missed making that year’s DTWC and has only missed one other since.

Josh became a full-time World of Outlaws Late Model Series competitor in 2005, winning Rookie of the Year honors and his first race at Lebanon Valley. He won his second WoO event in Columbus in 2006, when he finished ninth in the series standings.        Josh starting winning consistently from 2007 to2008.  He added wins at Pittsburgh Motor Speedway’s Pittsburgher, Hagerstown’s 60th Anniversary Classic, the Hungry Man Showdown and Vault World Finals at Charlotte, along with other various regional and World of Outlaw events.  He finished the 2008 season second in WoO standings.

In 2009 Josh was crowned the youngest World of Outlaws Series Champion.  In 2010 Josh became the first two-time champion. He won over 30 national and regional races those years, including his fourth consecutive WoO opener at Volusia, second and third consecutive Showdown in Charlotte, a $20,000 Mohawk 100, and a Raye Vest Memorial.  He was also the first driver to have three consecutive Lucas Oil Series victories in a 24-hour period at Eastbay Raceway.

In 2011 and 2012 Josh expanded his racing ventures into asphalt, competing in the NASCAR Nationwide and Camping World Truck Series while continuing to race on dirt. In 2011 he won his first Crown Jewel event, Cedar Lake’s $50,000-to-win USA Nationals. With 11 other World of Outlaws Series wins over that span, including Deer Creeks prestigious Gopher 50 and various East Coast regional victories over that span, Josh became the WoO’s winningest driver at that time.

Heading into his 10th full year in racing at 25 years old, Josh has amassed more than 60 wins – over 40 of which are World of Outlaws Late Model Series victories – and has competed at almost 200 different tracks.